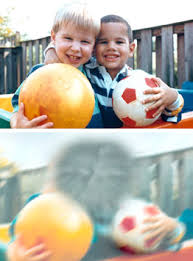 17 Feb What does Stargardts and Macular Degeneration Look like

Posted at 20:11h in Uncategorized

Age-related macular degeneration, often called AMD or ARMD, is the leading cause of vision loss and blindness among Americans who are age 65 and older. Because people in this group are an increasingly larger percentage of the general population, vision loss from macular degeneration is a growing problem. (http://www.allaboutvision.com/conditions/amd.htm)

While macular degeneration generally is associated with aging eyes, an inherited form known as Stargardt's disease can affect children and young adults.

Stargardt's disease — also called fundus flavimaculatus or Stargardt's macular dystrophy (SMD) — affects approximately one in 10,000 people and is characterized by central vision loss early in life. (Some researchers believe a distinction should be made between Stargardt's disease and fundus flavimaculatus, because they say each describes a different variant of the eye disease.) http://www.allaboutvision.com/conditions/stargardts.htm