Posted at 19:28h in Other Blind Tools, Screen Readers, Word

There are many ways to adapt work, but how about so called inaccessible work–all that is possible. Here are a few ways to do just that.

How to adapt work for low vision–continue on with skills

How to adapt work for blind/low vision students

Posted at 17:59h in Uncategorized

Posted at 15:51h in Other Blind Tools

Jordan reviews many aspects of the incredible Braillenote Touch

10 Aug Recommendations and reservations regarding Graphing calculators for Users

Posted at 16:52h in Other Blind Tools

ORION TI-84+ Talking Graphing Calculator
Available from APH with federal quota money  www.aph.org/
Even though it does not have a large keypad or large screen, this
calculator is accessible to a low vision student through speech and
sonification of graphs. The student could also use a magnification tool if
needed. Finally, the math teacher can assist with its use. Combine with a graphing cable and graphing can be outputted onto a computer for student to send to the teacher or move into a Word document to complete math problems, in addition to embossing the graph to feel.

SciPlus-2500 Talking Graphing Scientific Calculator
http://sightenhancement.com/
This calculator does have a large keypad and large screen, but teachers
have reported that they would not recommend this calculator. TVIs could
not get it to work, nor could the math teachers who had a blind student in
their math class.

TI-Smart View 2.0
The Emulator Software Package for the TI-84+
http://education.ti.com/educationportal/

Scientific Notebook
www.mackichan.com
This software program is a word/math processor along with being a
scientific graphing calculator. It also contains a math tutorial. However,
it does contain a CAS (Computer Algebra System) and is not allowed in some
teaching situations.

Desmos Graphing Calculator (available for iPad and Android)
They are trying to make this calculator more accessible – better for low
vision user than a totally blind one at this point in time.

Free Graphing Calculator by William Jockusch (available for iPad and
Android)
The author has made improvements for low vision users. He is open to more
suggestions.

Many types of Braille Font

Posted at 12:06h in Uncategorized

I use these images as examples in my presentations. 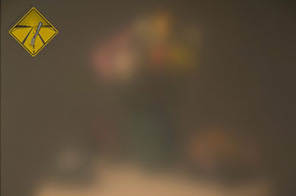 Now, you can get an idea of what a visual impairment actually looks like 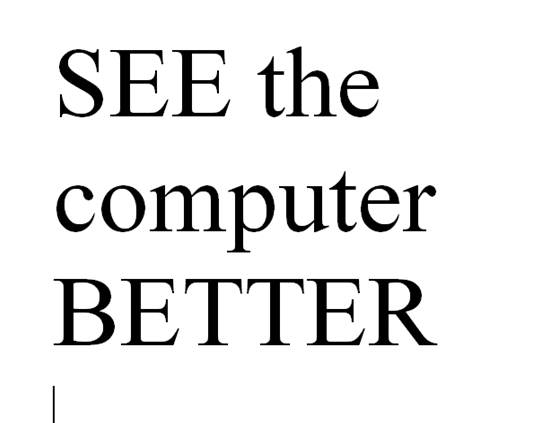 22 Jul How to SEE your computer better with Low Vision

There is a larger population of low vision people than blind. The low vision population is growing rapidly as people age and have diminished sight. If you wish to continue to use your computer with ease, eighteen low vision lessons to teach you how to download large cursors, enhance contrast on your machine, multiple ways to enlarge text in Word, enlarging text and graphics in the Internet and how to set up a low vision device for students in classrooms that need to see the board has been created for you. This group of lessons that will help you increase your ability to SEE everything on your computer. Go to the Low Vision TAB above, where both XP-Office 2003 and Windows 7-Office 2010 are available for immediate download.

Watch video on Youtube: Dr. Denise Robinson demonstrates Low Vision tricks on the computer and How to SEE your computer better

The iPad has several wonderful tricks to enable you to see what you are doing while moving around and typing text. Use Zoom, or enlarge Text or use White and Black. You can combine Voice Over to speak the text while using Enlarge Text or White and Black contrast….so many options.

Watch a Youtube video to get you going: iPad and Low Vision Tricks